The Red King, The Firestorm from the East, The Betrayer of Bozja.All names to describe a man haunted by the choices of his past.Choices that he never truly had.

Born in Garlean Occupied Bozja, His early life was hard. With no father, and an accident taking her mother's life, Azkhal was alone to face the Slums of Bozja.Once he reached enough age, He saw no other choice to escape his life of poverty... He enlisted to become a Garlean Battle Mage.Azkhal trained for 3 years, and in that time he Met, Fought and Trained with who would become his first Wife; Amali Olisasch.They were a couple for 2 years before Amali got Drafted, and had 2 children; Azthol and Ambrada.
They decided to get Married the day before she was Drafted into the Garlean Legions.Amali was released of service after a year in the frontlines. She had lost a leg in battle, and was saw as not fit for being on the Frontline anymore.Once his Wife returned... It was Azkhal's turn to get drafted into the Legions.He served for more than a year and a half, Razing and destroying the opossition of the empire there where he was sent... Azkhal hated every single second of his draft... But he pushed forth... For his Family, For his wife... For his Son and Daughter.Once the rebellion started... Well... This is a memory he wishes to remain buried... Something that haunts him to this very day...He had no choice... He did what needed to be done.That is what Azkhal tells to himself to be able to sleep at night.Seven years had passed since the Bozjan Rebellion, He now lives on Limsa Lominsa, Working as private Gleamer for the Forum of Sharlayan. Whenever there is a specially dangerous Artifact or Specimen that needs to be brought in for Research, He is one of the first ones to be summoned to begin the hunt.

Azkhal is a 36 year old Hrothgar, Black fur with red stripes that run all over his back and tail.
Standing 8ft tall, The first thing that someone will notice besides his height, is the Hrothgar's strong build; Broad shoulders, legs thick as treetrunks and arms wide as a viera's waist. Crimson-Red slitted eyes and long tusks give him an intimdiating look accompanied with his large frame. All of this is counterbalanced by his usual professional Sharlayan Clothes and the warm, friendly smile that governs his factions.
He is truly a gentle giant with a heart of gold, Willing to always lend a ear, advice and a hand to those who truly need it. 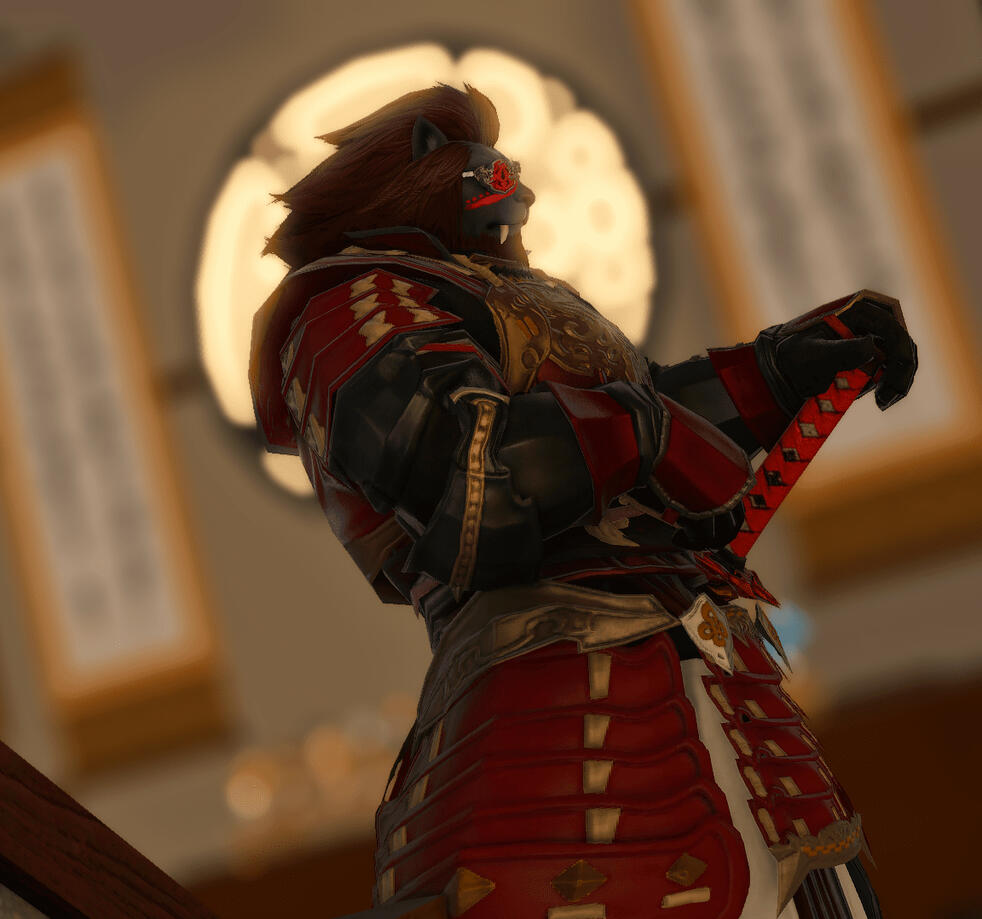 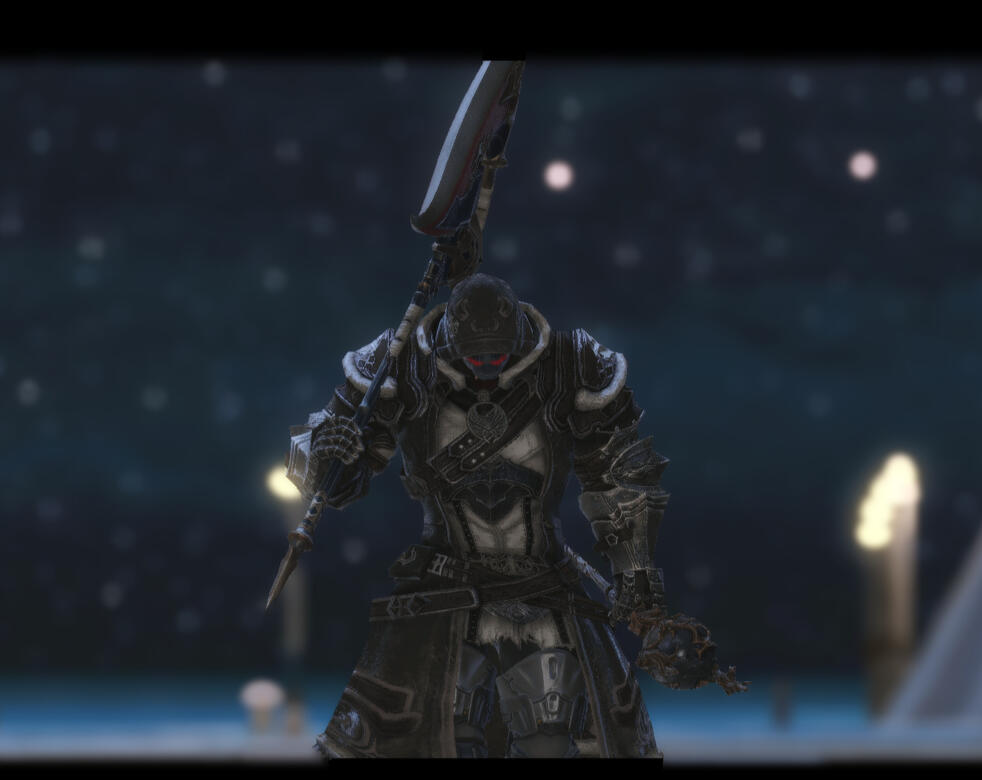 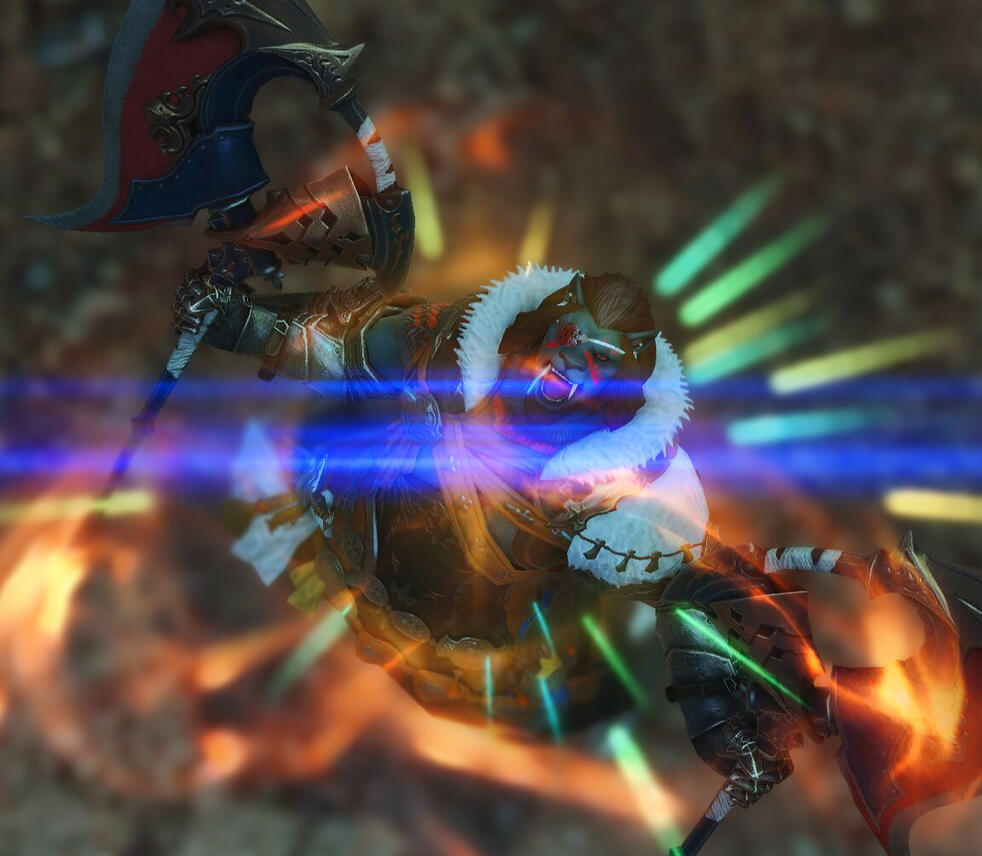 He usually roams around the world, If you were to find him in your adventures, never be afraid to approach him and talk with him.

I dont know what to put here really... I tend to be really chill and love to get to know other characters and people. Im not shy... But i do worry sometimes of being too abrasive with people i just met. So if i ever step over a line with you; Let me know! im someone open-minded that is not afraid to Adapt to the likings of different kind of people and try to be better!However... The sames applies to you, my dear reader. If i ever feel unconfortable around you, or there is a specific thing that i do not agree with, i will always say it. Know that i do not do it out of disrespect... i do it with the mere intention of you and i trying to get along better.